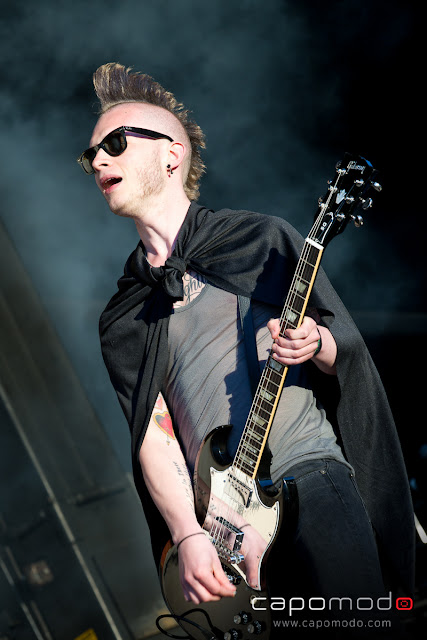 Hi guys and girls! i hope you are all doing well out there..

I actually wanted to make a video for you, but between doing loud rock'n'roll in a basement and doing loud rock'n'roll in a basement, there was simply no time for it. Next feed from me will be a video - promise!!
As the attentive of you might have noticed, we are now giving you a blog every monday and we take turns. This is my first! So what to call it?? Mattias suggested "Dirty Danny".. Pretty cool! If you put Diary after it, maybe even better.. I dont know though, i dont feel that dirty - what ever that means.. What is cool though, is that it sounds a bit like the Michael Jackson song called "Dirty Diana", which is one of my favorite MJ songs! So thats name idea no. 1!

Or something as stupid as; "THE ROCK BLOG".. Cause I like rock, you know? If this had been a video, you would now see me laugh, cause of the idiotic rhetorical question above. How many out there like some good rock'n'roll? At least I know I do! Nothing like loud rock music to get me going at any hour of the day! Idea no. 2!

The one that I am leaning against is something else though; Its the unsorted stream of everything that is going on right now - in my head.. Maybe it wont always make sense, maybe sometimes it will, maybe sometimes it will be a bunch of things that does not matter. Nevertheless, it will be a stream from my head.. Sometimes is might get a bit dirty, sometimes (probably often!!) it will have something to do with FUCKING LOUD rock music.. Only time will tell, right? At least I will cross that bridge when i get there.. Maybe some of you wanna cross it with me, would be my pleasure, but we gotta get there first.. So while we wait, you guys go listen to some rock'n'roll music, okay? :) Idea no. 3; "Streams From Dansilvania"

To already kick that of a bit; i went to the cinema tonight (in this awesome small cinema in Kreuzberg, Berlin). I saw this new movie with Sean Penn, its called "Cheyenne - This Must Be The Place".. For those of you who already saw it, you know what I am talking about. For those who did not; go to a cinema near you and watch this movie very soon! Its awesome!! That guy can play everything - and he was married to Madonna! Not so bad, right?

Now its 23:56, I am sitting in my bed writing this feed or stream or whatever, cause let me be honest, I totally forgot about it.. But here it is, I made it! Might be kind of funny, but I promise you guys and girls, that its coming directly, unprocessed and honestly from me..