Here's a blog from Mattias about some of his scars :) 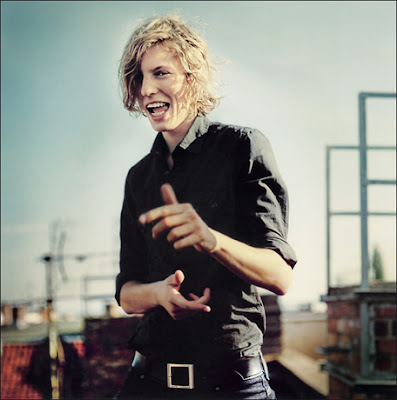 I’m full of scars. Maybe not on my soul, but on my body. Since I was about 2 years old I have been Mister Unlucky. Here’s the story of my first scar:
It all started with a good old swing. My family and I were living in a tiny town outside Skive called Jebjerg. As you may know I’m blessed with two older brothers. They are about 4 ½ and 5 ½ older than me, so when I was two years old they were already insane 6 and 7 year olds. So were their friends and our garden was always the place to be (we had a goat and 16 rabbits, but that’s another story). Needless to say, kids at that age are pretty rough on each other and being the absolute youngest (and cutest) I was just trying to tag along.

One of the neighbours kids, Lars Leverpostej(English: Lars Liverwurst // German: Lars Leberwurst), were especially wild. He was obese, noisy, and filthy and had mentally 2 years younger than his peers. He’s dad was a drunk and once Lars dropped a whole piece of bread with liverwurst on it on himself at school (that’s where he got his nick name from). Anyway, this poor soul was actually a very nice guy and was only a little wild because he wanted to be like the other kids.

One day we were playing in our garden as usual. I was standing in front of a couple of swings we had in the garden and suddenly Lars Liverwurst ran over, grabbed the swing and threw it as fast as he could at me. The swing swung in full tempo towards me and hit me directly in the forehead. In chock I was standing there crying while blood was poring down my head. Lars, realizing what he had done, ran away and hid in some bushes nearby while I was rushed to the hospital. Some time went by before Lars Liverwurst came over to play again.

Today I still carry this thin horizontal scar on my forehead. It’s always been a part of me and since I’ve added quite a few more to the collection.
Indsendt af H kl. 13.44